How ETA's are calculated Print

What is an ETA?

ETA stands for ''Estimated Time of Arrival'', which stands for the expected arrival time of a driver.

The ETA is often shown as time (example: ~10:14) or as positive or negative deviation from the planned time (example: -83). This is adjustable per Control Tower.

This example shows an estimated time of arrival:

This example shows the variance from the schedule in minutes: 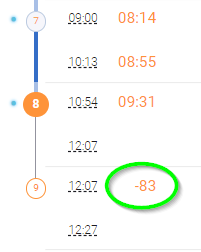 A blue number means the stop is 'on time'. Red means: too late. Orange means: too early. The limits on the basis of which this is determined can be set per Control Tower. We call such a deviation an exception. Example settings:

How is the ETA calculated?

The following matters are included in the ETA calculation:

The ETA is calculated based on the position of the vehicle + the distance it still has to travel + what is known about traffic jams and similar delays on the planned route.

An ETA will not be reliable if there is not enough GPS data available, making the current position and speed of the vehicle unknown or difficult to determine. It is therefore important that the on-board computer or driver app can deliver this properly. The ETA is updated every time the on-board computer or driver app sends GPS data and every time there is a change in the planning. This may be due to an update from the plan package or because a stop has been manually removed in the Control Tower.

Below are explanations for problems that may occur with the ETAs in your Control Tower.

Problem: ETA is missing or +0

Problem: ETA is (much) higher than expected

It does happen that when the route is changed during a trip - for example a stop is added or removed - the CT does not process the route change properly. For example, it continues to route via a removed stop location and therefore shows an illogical delay. You can check on the map what the route looks like there.

Note: The driver generally does not notice this during the trip, it only looks strange in the CT.

Problem: ETA is (much) lower than expected

This can also be related to trip changes during an active trip, for example that stops have been towed. Look at the map to see what the route looks like. The driver generally does not notice this, it just looks strange in the CT.

Example of a trip with many changes, resulting in strange sequences: